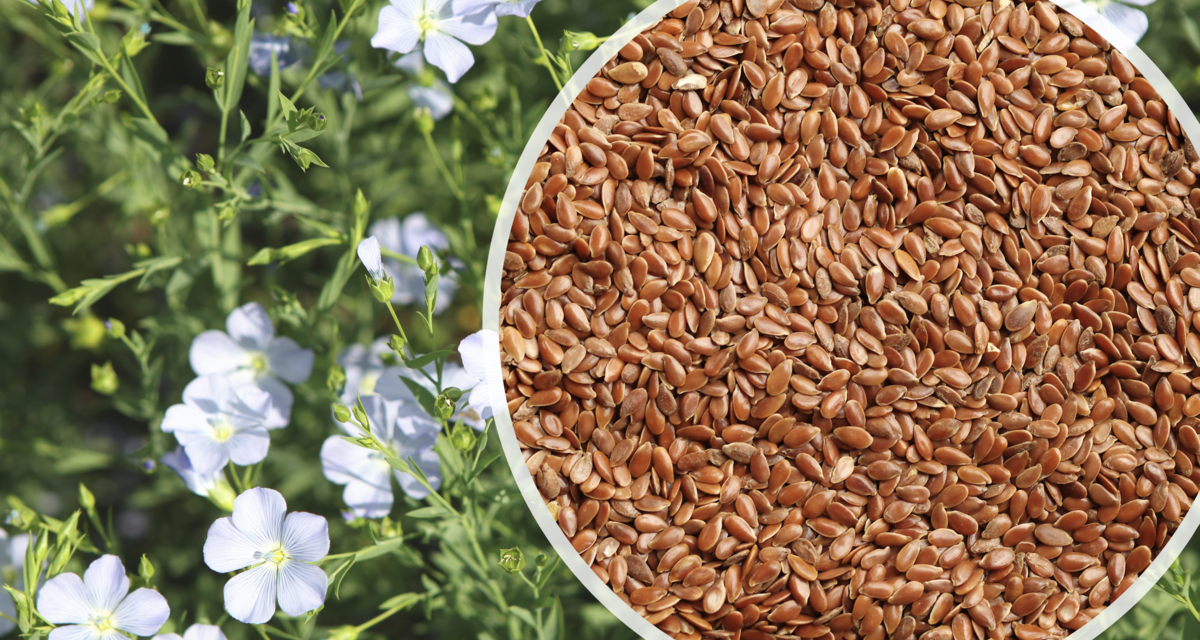 Flaxseeds have many positive health benefits and are loaded with fiber, protein and heart healthy omega-3s. They contain beneficial plant compounds and help to stave off or reduce the effects of several diseases. Scientist site these top health and wellness characteristics:

Flaxseeds (Linum usitatissimum), also called common flax or linseeds, are small oilseeds that originated in the Middle East thousands of years ago. They are one of our oldest known crops, growing since the beginning of civilization.  There are both brown and golden flaxseeds — both of which are equally nutritious.

Flaxseeds are a great source of plant-based  protein, which has caused them to become extremely popular. That protein is rich in the amino acids arginine, aspartic acid and glutamic acid.

Christina Cook, PhD, an internationally known seed researcher with post Doc work in Nanobiotechnology and Bioscience Engineering from Harvard University, says that although many of the attributes of flax seed need to be  “further established,” research indicates that flax may reduce risks of certain cancers as well as  cardiovascular disease  and  lung disease.

In terms of wellness, Dr. Cook sites that many recent studies suggest that flaxseed may help to protect against breast cancer,  prostate cancer, and  colon cancer.

In animal studies, the plant omega-3 fatty acid found in flaxseed, called ALA, inhibited tumor incidence and growth. Consuming lignans during adolescence helps reduce the risk of breast cancer  and may also increase the survival of breast cancer patients. Lignans may help protect against cancer  by blocking enzymes that are involved in hormone  metabolism  and interfering with the growth and spread of tumor cells.

Some studies have suggested that eating flaxseed daily may also help your cholesterol levels. The level of LDL or “bad” cholesterol in the bloodstream has been linked to an increased risk of heart disease, obesity, diabetes, and metabolic syndrome. These cholesterol-lowering effects of flaxseed are the result of the combined benefits of the omega-3 ALA, fiber, and lignans.

Flaxseed are loaded with nutrients. They provide a good source of protein, fiber and omega-3 fatty acids, in addition to being rich in vitamins and minerals.

One tablespoon of ground flaxseeds contains the following:

p-Coumaric acid:  This polyphenol is one of the main antioxidants found in flaxseeds.

Cyanogenic glycosides:  These substances may form compounds called thiocyanates in the body, which can impair thyroid function in some people.

Phytosterols:  Related to cholesterol,  phytosterols  are found in the cell membranes of plants. They have been shown to have cholesterol-lowering effects in the body.

Lignans:  Lignans are present in almost all plants, acting as both antioxidants  and phytoestrogens. Flaxseeds are the richest known dietary source of lignans, containing up to 800 times more than other foods.

Just one tablespoon of flaxseeds contains 3 grams of fiber, or 8–12% of the daily recommended amount for men and women.

It contains two types of dietary fiber — soluble (20–40%) and insoluble (60–80%). This fiber duo gets fermented by the bacteria in the large bowel, bulks up stools and results in more regular bowel movements.

Soluble fiber increases the consistency of the contents of the intestine and slows down  digestion. This has been shown to help regulate blood sugar and lower cholesterol.

Insoluble fiber, the other half of the dynamic duo, allows more water to bind to the stools, increases their bulk and results in softer stools. This helps in  preventing constipation, especially  for those who have irritable bowel syndrome or diverticular disease.

Soluble fiber helps regulate blood sugar and cholesterol levels. It also promotes digestive health by feeding the beneficial bacteria in the digestive system. Flaxseeds are a natural laxative that can help promote regularity, prevent constipation and reduce the risk of diabetes. Almost 95% of the carbs in flaxseeds are made of fiber.

Flaxseeds are made up of 18%  protein with an amino acid profile similar to  soybeans. Even though they contain essential amino acids, they are lacking in the amino acid lysine. Therefore, they are unable to serve as the sole protein source in the diet. However, they are a great alternative protein source for people who don’t eat meat.

Flaxseed proteins may be useful against fungal infections, high blood pressure, high cholesterol, type 2 diabetes and inflammation.  They are also high in arginine and glutamine. Both of these are important in preventing heart disease and supporting the immune system.

If you are a vegetarian or don’t eat fish, flaxseeds are one of the best plant based sources of heart healthy omega-3 fats.

Flaxseeds are also a rich source of  the omega-3 fatty acid ALA. ALA is an essential fatty acid, which means the body cannot produce it, so we can only get it from the food we eat.  The only other seed to exceed the amount of ALA of flaxseeds in chia seeds.

Because of their high content of omega-3 fatty acids, flaxseeds promote a lower ratio of  omega-6 to omega-3, which may significantly reduce the risk of various chronic diseases.

However, flaxseeds are not as potent as fish oils in providing omega-3. The ALA in flaxseeds needs to be converted into EPA and DHA in the body, a process that isn’t very efficient.

There is one variety that is not as nutritious as regular flaxseed, a yellow flax called “solin.” It has a very different oil profile and is low in omega-3 fatty acids.

Flaxseeds are an excellent source of these vitamins and minerals:

Vitamin B1: Thiamine, or Vitamin B1, is essential for normal metabolism and nerve function.

Copper:  Copper is an essential mineral that is important for growth and development.

Molybdenum:  Flaxseeds are rich in molybdenum, an essential trace mineral. It is found in seeds, grains and legumes.

Magnesium:  Found in high amounts in grains, seeds, nuts and green leafy vegetables, magnesium is a mineral that helps many functions in the body.

Phosphorus:  This mineral aids bone health and tissue maintenance, and is usually found in protein-rich foods .

If you enjoy a little snacking between meals, you might want to consider adding flaxseeds to your diet to keep hunger at bay. One study found that adding 25 grams of ground flaxseeds to a beverage reduced the feelings of hunger and overall appetite.

That reduced feeling of hunger was most likely due to the soluble fiber found in flaxseeds. It slows digestion in the stomach and triggers hormones that provide a feeling of being full.

The lignans found in flaxseed may provide some protection against cancers that are  sensitive to hormones without interfering with the  breast cancer  drug  tamoxifen.

Flaxseeds can be a very beneficial addition to the diet of people with Type 2 Diabetes — a huge health concern around the world. Type 2 causes people to have high blood sugar levels because of their body’s inability to secrete insulin or resistance to it.

A few studies have found that people with Type 2 Diabetes who added 10–20 grams of flaxseed powder to their daily diet for at least one month had a  8–20% reduction in blood sugar levels.  Research shows that it is the insoluble fiber in flaxseed that slows down the release of sugar into the blood.

It’s a well-known fact that high blood cholesterol is a risk factor when it comes to heart disease. That is especially true when talking about oxidized LDL-cholesterol. Studies have shown that daily consumption of flaxseeds, or flaxseed oil, may lower cholesterols levels by as much as 6 – 11%. These same studies also show a 9–18% reduction in the number of LDL particles.

Flaxseeds may also be very useful when taken alongside cholesterol-lowering medication. In one 12-month study, flaxseeds caused an additional 8.5% reduction in LDL-cholesterol, when compared to those who didn’t consume flaxseeds. This may be caused by the high fiber and lignan content found in flaxseeds. They bind with cholesterol-rich bile acids and carry them down the digestive tract. This reduces cholesterol levels in the body.

According to a large review that looked at data from 11 studies, taking flaxseeds daily for more than three months lowered blood pressure by 2 mmHg. While that may seem small, a 2-mmHg reduction in blood pressure can lower the risk of dying from stroke by 10% and from heart disease by 7%. Postmenopausal women who consuming 30 grams of flaxseeds daily lowered total cholesterol and LDL cholesterol by approximately 7% and 10%, respectively.

Flaxseeds are very high in the omega-3 fatty acid alpha-linolenic acid (ALA). Because they can reduce inflammation in the arteries, they have been shown to decrease the risk of heart disease in animal studies. Plant-based ALA fatty acids seem to benefit the heart in much the same way that fish oils do.

Several studies have specifically linked ALA with a lower risk of stroke, heart attacks and chronic kidney disease. These studies also observed a 73% lower risk of sudden death when compared to those with lower ALA intake.

In one study, patients with heart disease were given 2.9 grams per day of ALA for one year. Those who received the supplement had significantly lower death and heart attacks rates than those not taking ALA.

Many people suffer from diarrhea and constipation. They not only cause major stress on the body, they can also threaten our health.

Approximately 2 –7% of people in the United States suffer from chronic diarrhea. Reoccurring constipation affects about 12 – 19%. This rate can be as high as 27% in Europe, women being at twice the risk of men.

Flaxseeds naturally contain plant compounds called cyanogenic glycosides. They can bind with sulfur compounds  to form thiocyanates. Excessive amounts of thiocyanates may impair the function of the thyroid gland.

Moderate portions of flaxseed are highly unlikely to cause any adverse effects in healthy individuals. However, those who suffer from thyroid problems should consider avoiding high amounts of flaxseeds.

For people who aren’t used to eating a lot of fiber, incorporating flaxseeds too quickly into their diet can cause mild digestive problems like bloating, gas, abdominal pain and nausea. It is best to start with small doses and work your way up to one or two tablespoons daily.

Adding flaxseeds to the diet may also increase bowel movement frequency because flaxseeds act as  a natural laxative.

Although there are limited studies to back this up, many healthcare professionals feel that consuming flaxseeds during pregnancy may have undesirable effects. This is because there are phytoestrogens in flaxseed that act similarly to the hormone estrogen.

Some animal studies have shown that flaxseeds may cause lower birth weight and affect the development of the offspring’s reproductive system, especially if consumed during early pregnancy.

It is unlikely, however,  that smaller doses of flaxseeds will have an adverse effect. But during pregnancy and lactation, it is recommended to limit the intake of flaxseeds.

Some studies have shown that large doses of omega-3 fatty acids may have blood thinning effects. If you have a bleeding disorder or are taking blood thinners, consult with your doctor before incorporating large amounts of flaxseeds into the diet.

Dry flaxseeds are usually well tolerated by the body. It is very rare to have a flaxseed allergy.  However, it is recommended to drink plenty of water when eating flaxseeds.

Similar to many other seeds, flaxseeds contain phytic acid. Phytic acid is often referred to as an “anti-nutrient” because it may reduce the absorption of minerals like iron and zinc. However, phytic acid only impairs mineral absorption in a single meal. It doesn’t affect subsequent meals. This should not be a major concern except for people who are deficient in minerals like iron.

For those who take blood pressure medication, flaxseeds may lower blood pressure even further. Consult with your doctor to make sure you are taking the proper dosage of each.

A typical serving size for ground flaxseeds is 1 tablespoon (7 grams). However, it is recommended to keep serving sizes to less than 5 tablespoons (50 grams) per day.  One tablespoon provides a good amount of protein, fiber and omega-3 fatty acids, in addition to being a rich source of  vitamins and minerals.

Side Effects and Interactions