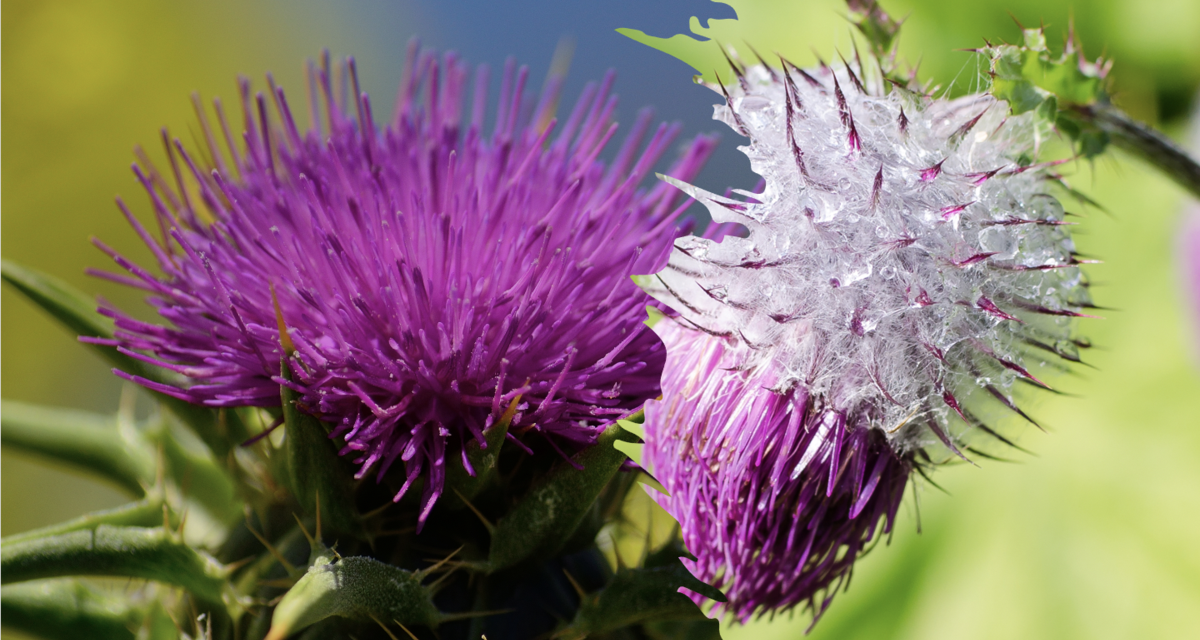 Milk Thistle has been used as an herbal remedy for over 2,000 years. It can be used to treat a variety of disorders throughout the body. However, it has traditionally been used for liver and gallbladder disease. Several small studies have uncovered that milk thistle compounds may have antiviral and anti-inflammatory effects as well. Some of the main benefits of milk thistle are:

Milk Thistle, or Silybum marianum, is a centuries old medicinal plant that is native to Europe, Asia Minor, southern Russia and northern Africa. According to folk tradition, its violet flowers and white-veined leaves come from the Virgin Mary’s milk.

The active ingredient of milk thistle is silybin. Silymarin is a complex of biological compounds that include silibin, and is both an antioxidant and an anti-inflammatory. Because silymarin is the main component of milk thistle, the two words are often used interchangeably.

Throughout history, milk thistle has been used to treat liver disorders like hepatitis, jaundice, and cirrhosis as well as gallbladder disease. In fact, in the United States it is the most commonly used herbal supplement for liver problems.

Dr. Christina Rahm Cook, renowned seed nutrition researcher and expert has stated in numerous presentations and scientific editorials, “Milk Thistle is regarded as a potent agent against insulin resistance and diabetes-induced hyperglycemia.”  “I love Milk Thistle because it is considered a therapeutic agent for liver disorders.”

But there are also some other surprising benefits of milk thistle. It’s been used to fight a wide variety of ailments — everything from hangovers, to saving the lives of those who have accidentally ingested poisonous mushrooms. The amanita, or deathcap mushroom, releases a dangerous toxin called amatoxin. In Europe and North America, a review of 2000 people exposed to this mushroom stated that silibin was the most effective therapy. A trial is the US (NCT00915681) is examining how well an intravenous formula may work in patients who have been poisoned by amatoxin.

There is some evidence to suggest that milk thistle can help to boost breast milk production by making more of the milk-producing hormone called prolactin.

Although data is limited, one study found that mothers who took 420 mg of milk thistle for 63 days produced 64% more milk than those taking a placebo.

More research is needed to confirm the results and to ensure that milk thistle is safe for breastfeeding moms.

Milk thistle has often been noted for have liver-protecting effects. Historically it has been used as a supplemental therapy for people who suffer from hepatitis, fatty liver disease, cirrhosis, jaundice, and even liver cancer.

For those who have liver disease, studies have shown improvements in liver function, suggesting milk thistle may help with both liver inflammation and damage. Although more research is needed, it’s thought to reduce damage to the liver caused by free radicals. Free radicals are produced when your liver metabolizes toxins. One study did find that it may extend life expectancy of those with cirrhosis due to alcoholic liver disease.

Although milk thistle extract is commonly used to treat the liver, there’s currently no evidence that it can prevent you from getting liver disease.

Silymarin, the main ingredient in milk thistle, may have some anti-cancer effects. Some studies on animals have shown that it could reduce the side effects of cancer treatments. It may also help make chemotherapy more effective. In some cases, it may even help destroy cancer cells. However, human studies have been very limited, so they have yet to show a meaningful clinical effect.

Although there is more scientific study needed on milk thistle as it relates to heart health, there is some good news. By lowering LDL, or bad cholesterol, milk thistle may help decrease a person’s chance of having heart disease. These studies have only been conducted on people with diabetes, who often have high cholesterol. It’s unclear if milk thistle would have the same effect on people who don’t.

Research suggests that when you combine milk thistle with traditional treatment, it can help to  improve diabetes. For people with Type 2 Diabetes, studies have shown improved  cholesterol as well as decreased  blood sugar levels. An improvement in insulin resistance was also identified.

A recent analysis found that people who routinely take milk thistle experienced a significant reduction in their fasting blood sugar levels and HbA1c, which is a measure of blood sugar control. (44). Milk thistle’s antioxidant and anti-inflammatory properties may also help reduce the risk of having complications from diabetes, like kidney disease. However, more study is needed to confirm these findings.

Remember, diabetes is a serious condition. Consult your doctor before taking milk thistle.

For over 2,000 years, milk thistle has been used as a traditional remedy for neurological diseases like Alzheimer’s and Parkinson’s. Because it has both antioxidant and anti-inflammatory properties, it aids in protecting the nerves. Milk Thistle also helps prevent a decline in brain function that many people experience as they grow older.

In some promising test-tube and animal studies, there is evidence to suggest that milk thistle may be able to reduce the number of amyloid plaques in the brains of animals with Alzheimer’s. Plague is a sticky cluster of proteins that can build up between nerve cells as you grow older. People with Alzheimer’s have large amounts of plaque build-up on their brains, so it’s possible that milk thistle could help remedy this difficult condition. However, there are no human studies to support these theories. It’s unclear whether the body could absorb enough of it to have a significant effect.

Bone health is a real concern for many people. Osteoporosis, probably the most commonly heard of bone disease, is caused by progressive bone loss. It usually develops slowly over many years and makes bones fragile and easy to break, even from a minor fall.

In test-tube and animal studies, milk thistle has been show to stimulate bone mineralization and potentially protect against bone loss. As a result of these findings, researchers are now suggesting that milk thistle may be useful in delaying bone loss in postmenopausal women. However, there are currently no human studies, so it’s unclear how effective it may be.

The Greek physician and botanist Dioscorides (40–90 AD) was the first to describe milk thistle’s healing properties.  Later in 1597, John Gerard noted that milk thistle was “the best remedy against melancholy diseases”.

In modern times, a preliminary study investigated how effective milk thistle was to relieve obsessive compulsive disorder (OCD). Thirty-five adults were randomized to receive either 600 mg of milk thistle a day or 30 mg of fluoxetine — the medication commonly used to treat the illness. After 8 weeks of use, researchers didn’t find any substantial difference between the two groups.

Milk thistle is generally considered to be safe when taken orally. In fact, even in studies where people took large doses for long periods of time, only about 1% experienced any side effects.

Some people are advised to take caution when using milk thistle. Those groups are:

The following are possible drug and condition interactions with milk thistle:

The standard dose of milk thistle is 200 mg 2 to 3 times a day, as long as the extract contains 70% silymarin. Based on evidence from clinical trials, it is safe to take an oral form of milk thistle for up to 41 months if it is standardized to 70 to 80% silymarin taken at 420 mg a day divided in doses.

Milk thistle can be taken orally as a supplement or in tea form.