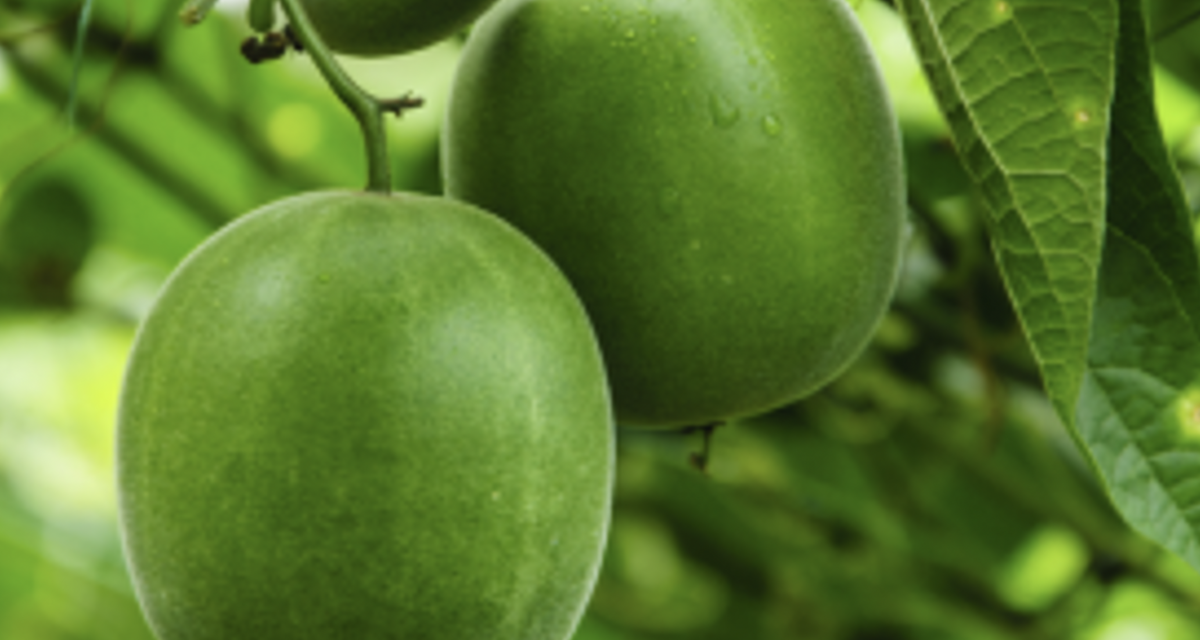 The monk fruit, also known as lo han guo, is a small green melon that originated in south  China and was named for the monks who first cultivated it centuries ago. The fruit’s health  benefits have been well-known in Traditional Chinese Medicine (TCM) for decades, but now it’s  finding its way into the health mainstream. Monk fruit sweetener is made from dried fruit  extract. The extract is 150-250 times more effective than table sugar, contains no calories or  carbohydrates, and does not cause blood glucose levels to rise. Monk fruit is “generally accepted  as healthy (GRAS)” for all, including pregnant women and infants, according to the FDA. The  monk fruit has a number of health advantages, including being healthy for diabetics, promoting  weight loss, and having anti-inflammatory properties. Natural compounds called mogrosides  give monk fruit its sweetness. Since it does not raise blood sugar levels, it is generally healthy  for diabetics. Monk fruit also has no calories, carbs, or fat, making it a good option for those  watching their weight. Monk fruit has been used in TCM for centuries to make hot beverages  that alleviate sore throats and suppress phlegm, according to a 2011 report. Mogrosides, which  are found in the fruit, are anti-inflammatory and can help prevent cancer and reduce blood sugar  levels.

With sugar consumption at an all-time peak, many consumers have made it a priority to  pursue natural sweet substitutes. The concern is that, contrary to popular belief, sugar substitutes  and artificial sweeteners also contain other unhealthy chemicals and additives, and some also  contain calories and affect blood sugar levels. Monk fruits were originally cultivated in China’s  Guangxi and Guangdong Mountains, where they are now rare to find in the wild. Monk fruit and  its genetic material have been banned by the Chinese government, preventing them from leaving  the region. It has been used medicinally throughout history as an expectorant, cough cure,  constipation cure, and a solution for removing heat/fevers from the body. Experts now consider  sweet extracts from natural plants, such as stevia and monk fruit, to be viable sugar substitutes.

Non-nutritive sweeteners (NNS) can help with glycaemic regulation and body weight  maintenance as sweeteners are replaced. Energy compensation, glycaemic, and insulinaemic  reactions to artificial and natural NNS have only been studied in a few trials. The effects of  eating NNS (artificial versus natural) and sucrose (65 g) on energy consumption, blood glucose,  and insulin responses were compared in this study. When compared to a sucrose-sweetened soda,  calorie-free drinks sweetened with artificial and natural NNS have negligible effects on overall  daily energy intake, postprandial glucose, and insulin.

In Search for an Alternative to Sugar to Reduce  Obesity

Despite public health authorities’ concerns about the possible negative effects of sugar  intake, people are eating more of it. Sugar consumption should be limited to no more than 10%  of daily caloric intake, with a goal of lowering this to 5% or less for optimum health, according  to the World Health Organization. Unfortunately, replacing sugar with commercially available  artificial sweeteners does not seem to have a positive impact on health outcomes. While sugars  make up the majority of sweeteners, certain proteins, such as braziien and miraculin, have a high  sweetness and are being produced as sweeteners. To eliminate flavor defects, some firms are  working on developing “bitterness-blockers.” Additional randomized controlled trials are  required to determine the sugars’ long-term safety and effectiveness.

Recent Evidence for the Effects of Nonnutritive  Sweeteners on Glycaemic Control

Nonnutritive sweeteners (NNSs) are believed to help with weight loss and insulin  tolerance by replacing fat. They looked at the more recent randomized controlled trials (RCTs)  on the impact of NNSs on glycemic regulation. They are still unable to determine which forms of  NNS, if any, have an effect on glycemic regulation. More study is needed to address the  shortcomings of recent RCTs, such as sample size, intervention length, dosage, type of NNSs  used, and inclusion of only males or females. Future research should compare and contrast  various NNS forms, including the highly common ‘natural’ NNS.

The European Food Safety Authority’s (EFSA) Panel on Food Additives and Flavourings  (FAF) has issued a scientific opinion on the safety of Monk fruit extract, which has been  recommended for use as a new food additive in a variety of foods. Water extraction of the fruits  of Siraitia grosvenorii produces monk fruit extracts. In the bacterial reverse mutation assay,  monk fruit extracts containing 25% and 55% mogroside V were negative and did not cause  structural or numerical chromosomal damage. The Panel did acknowledge, however, that in vitro  toxicity tests, particularly those involving metabolic activation, were insufficient to assess the  genotoxic capacity of metabolites produced by microbial metabolism, including the aglycone.

They created a synbiotic yogurt with monk fruit extract as a sweetener and tested its  effectiveness on rats with type 2 diabetes caused by streptozotocin as well as a high-fat  diet.When compared to rats fed sucrose-sweetened yogurt, the rats fed synbiotic yogurt had  better blood glucose control and a substantial reduction in insulin resistance and glycosylated  hemoglobin, as well as a substantial increase in short-chain fatty acid levels and gut microbiota  status. Their findings suggest that monk fruit extract may be a suitable substitute for sucrose in  synbiotic yogurt products for people with type 2 diabetes who would like to slow the  development of the disease and its complications.

The Biosynthetic Pathway of the No Sugar, High Intensity Sweetener Mogroside V from Siraitia  Grosvenorii

Sweetener use, both natural and refined sugars, has been linked to a slew of modern-day  health issues. As a result, natural non-sugar sweeteners are gaining popularity. Squalene  epoxidases, triterpenoid synthases, epoxide hydrolases, cytochrome P450s, and UDP glucosyltransferases are the five enzyme families responsible for the synthesis of mogroside V,  according to a functional expression study of nearly 200 candidate genes. The experimentally  validated functional enzyme activities were confirmed by protein simulation and docking trials,  which also revealed the sequence of the metabolic steps in the pathway. When comparing the  genomic organization and expression patterns of these Siraitia genes to those of other  Cucurbitaceae orthologs, a remarkably organized expression of the pathway seems to have  played a role in the evolution of this species-specific and important metabolic pathway. On the  other hand, the pathway genes’ genomic organization, which is syntenously preserved among the  Cucurbitaceae, indicates that gene clustering cannot account for this novel secondary metabolic  pathway.