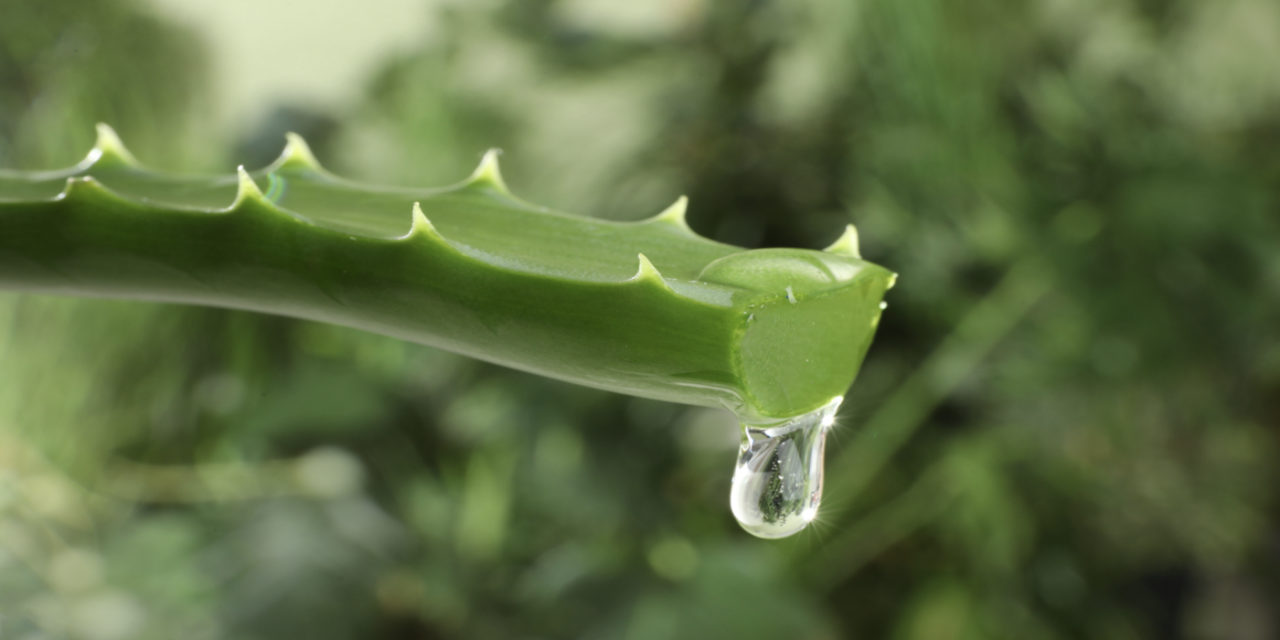 Aloe Vera is a popular medicinal plant that has been used in a variety of cultures for thousands of years. It’s most commonly known for treating skin injuries, like sunburns, but it has many other surprising health benefits. Here are some of its best qualities:

Aloe vera is a short-stemmed, thick plant that has the unique ability to store water in its fleshy leaves. The water-filled tissue in those leaves is the “gel” that we associate with aloe vera products used in the cosmetic, food, pharmaceutical and nutraceutical industries. Even though the gel is slightly slimy, it’s actually where all the good stuff lives. It’s packed with vitamins, minerals, amino acids and antioxidants.  Aloe vera juice is also very beneficial  because it is full of nutrients. Some of those nutrients are essential to our body, like vitamins B, C, E and folic acid.

History tells us that aloe vera is one of the oldest mentioned plants on record. It is believed that it originated in Sudan and was then introduced to the Mediterranean regions and warmer climates of the world.  The ancient Egyptians and Chinese used it to treat burns and wounds, and also to reduce fevers. Cleopatra reportedly used aloe in her daily skin regiment. Legend has it that Alexender the Great conquered an island off the coast of Africa just to secure aloe vera plants to treat his wounded soldiers.

From a young age, we’re taught how important taking care of our teeth and gums are. Reducing the buildup of plague, or bacterial biofilms, helps to prevent tooth decay.

In a study involving 300 people, 100% Aloe Vera juice was compared to the ingredient in most standard mouthwashes known as chlorehexidine. After 4 days, the Aloe vera rinse was found to be just as effecting in reducing dental plague as the standard mouthwash.  Another study conducted over a 15 – 30 day period produced almost identical results.

Studies have also shown that Aloe vera can speed the healing of canker sores, or mouth ulcers. In one study, it not only accelerated healing time, it also reduced pain. In another study involving 180 people with recurrent mouth ulcers, an Aloe vera patch effectively reduced ulcer size over a 7 day period. However, it did not outperform corticosteroids, a conventional ulcer treatment.

When you drink aloe vera juice, it helps increase water content in your intestines. Research has shown that if you have more water as you digest, it helps you pass stool more normally. Also aloe vera juice may help if you are constipated. It helps keep your healthy intestinal flora balanced for healthier gut bacteria.

There are several enzymes in aloe vera that help breakdown both sugars and fats to keep your digestion running smoothly. It may also aid in decreasing irritation in the stomach and intestines. In a double-blind, placebo controlled study, aloe vera was also beneficial in people suffering from ulcerative colitis.

Aloe vera is a rich source of antioxidants and vitamins, both of which are good at helping to protect our skin. Compounds in aloe vera can help neutralize UV radiation, repair skin from old UV damage and sometimes help to prevent fine lines and wrinkles.

In one study, 30 women over age 45 used a topical application of aloe vera gel over a 90 day period. Results showed an increase in collagen production and improved skin elasticity.

Aloe vera has often been used as a traditional remedy for diabetes.  Some early evidence suggests that aloe vera may help enhance insulin sensitivity and improve the management of blood sugar. For Type 2 Diabetes, several human and animal studies have found aloe vera extract may have some promising results. However, much more research is needed to support these claims.

Multiple sclerosis is an autoimmune disease of the central nervous system that affects around 2.5 million people worldwide. Animal studies have been conducted to test the therapeutic effect of aloe vera on an experimental model of MS. In one of those studies, results indicated that aloe vera caused a significant reduction in the severity of the disease. Data also showed that the progression of the disease, a big concern for MS patients, was weakened through the use of aloe vera.

Aloe vera juice helps aid in healthy liver function because it is great at hydrating and rich in phytonutrients. When it comes to detoxing the body, having a healthy, functioning liver is extremely important. The liver functions optimally when it is adequately nourished and hydrated.

Since Alzheimer’s disease affects so many patients, families and caregivers, more studies are being done on how nutrition and dietary supplements could become an alternative treatment. One pilot study investigated the effects of an aloe-based complex formula on cognitive and immune functioning of patients with AD. Conducted over a 12 month time period, patients consumed 4 teaspoons a day of the formula. The results were very promising and showed cognition scores significantly improve. It also pointed to significant decreases in tumor necrosis factor. The hope is that more studies are conducted to further uncover the benefits of aloe to those with AD.

Seborrheic Dermatitis (SD) is a skin disease that causes a red-ish rash and crusty yellow scales. It’s often found on the face and scalp. When infants have it, it’s commonly referred to as “cradle cap.”

One study found that by treating SD patients with aloe vera, it resulted in a significant reduction in scales, itchiness, and the size of the affected area. SD can also sometimes lead to temporary hair loss. Research has suggested that aloe vera can help stimulate hair growth by improving blood circulation and the delivery of both oxygen and nutrients to hair follicles.

For thousands of years aloe vera has been used as a topical medication. But it wasn’t until 1959 that the FDA approved its over-the-counter use to treat skin burns. It is also widely used to decrease discomfort and irritation associated with sun burns.

Studies suggest that aloe vera is effective in treating both first- and second-degree burns. A review of 4 studies found that aloe vera reduced healing time by 9 days compared to that of conventional medicine.

An interesting study was conducted with 50 patients who had locally advanced or metastatic solid tumors for which no other cancer therapy was available. Group 1 was administered 1 ml of aloe vera combined with 20 mg of melatonin twice a day. Group 2 received melatonin alone.

The results of Group 1 showed that 12 of 24, or 50% of patients had their disease stabilized. Only 7 of the 26 patients in Group 2 had the same results. Also the percentage of people who survived 1 year was significantly higher in Group 1 than in Group 2. This study shows promise for using aloe vera in the treatment of cancer. However additional research is needed.

Although you may see aloe vera promoted for treating gastrointestinal disorders like ulcers or IBS, evidence that it is effective is inconsistent. However, a more recent study to evaluate the efficacy and safety of aloe vera gel in the treatment of ulcerative colitis produced encouraging, though not completely conclusive, results.

In a trial that included 44 patients with mild to moderate ulcerative colitis, 30 people were given 100 ml of aloe vera gel orally 2 times a day for 4 weeks, while the remaining 14 patients were given a placebo. Improvement and sometimes remission in the group who received aloe vera was reported more often than in the placebo group. Despite the positive trend, the results failed to reach statistical significance. No adverse effects were observed, but more research and larger trials are needed to form conclusive evidence.

Aloe vera should be avoided by individuals with a known allergy to plants in the Liliacae family (garlic, onions, and tulips).

The World Health Organization tells us that aloe vera should not be used as a laxative during pregnancy. It may pose possible toxicological and teratogenic effect on the embryo and fetus.

If you have renal or cardiac disease, avoid aloe vera latex. It has been associated with watery diarrhea and electrolyte imbalance.

If you are taking any medication that is considered to be a substrate of Cytochrome P450 3A4 and CYP2D6, it is recommended to not drink aloe vera juice. It may increase the risk of side effects.

Aloe may also effect the drug Sevoflurane and cause excessive bleeding during surgery. Please check with your doctor if you are taking this medication.

By applying aloe vera to skin, you may increase the absorption of steroid creams like hydrocortisone.  It reduces the effectiveness and increases the negative effects of digoxin and digitoxin due to the potassium lowering effect.

Aloe vera creams and gels vary in dosge. For minor burns, some creams may only contain .5% aloe vera. For severe skin conditions, it may be as high as 70%.

As an oral supplement, aloe vera has no set dose.

If you are constipated, it is recommended to take 100-200 milligrams of juice, or 50 mg of extract daily.

For diabetes, 1 tablespoon of aloe vera gel has been used on a daily basis. However, ask your doctor’s advice as diabetes is a serious illness.