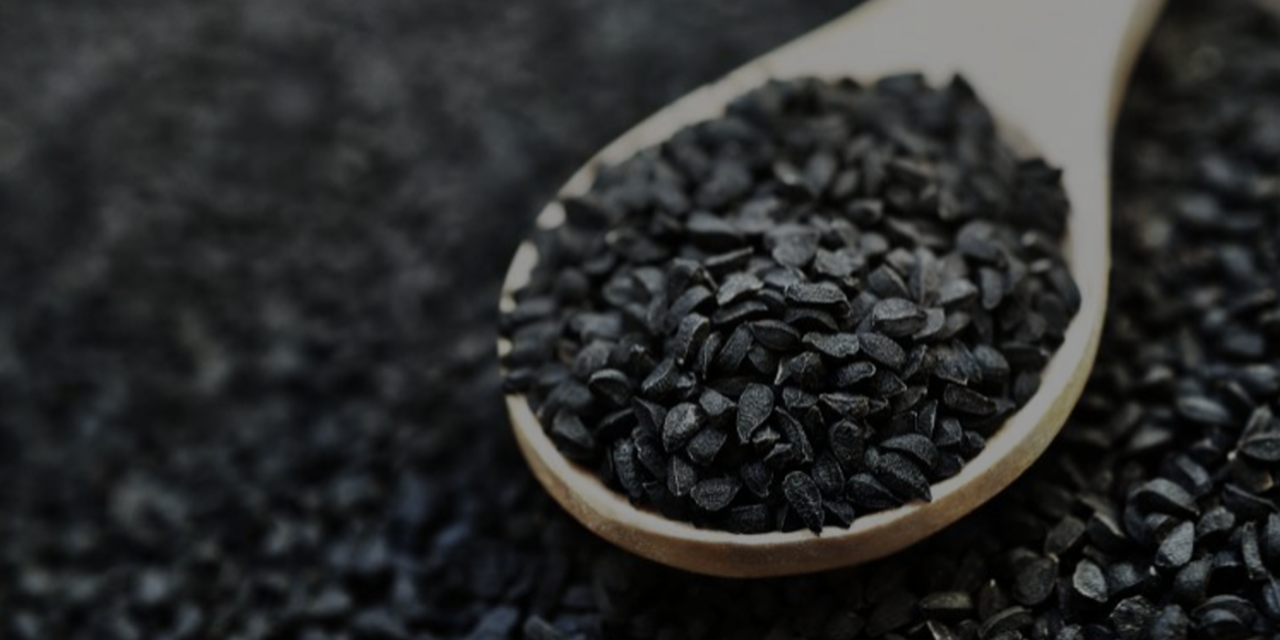 Black Cumin and Black Cumin Seed Oil have a variety of very powerful health benefits across many different conditions and diseases.  Black cumin seed may be small, but it is incredibly beneficial. Today, it is most notably used for the following:

Black Cumin, or Nigella Sativa, has a 4000 year old history. It is one of the oldest healing balms in the world.  Popular with the ancient Egyptians, a bottle of black cumin seed oil was even found near Tutankhamun’s tomb.  In the Middle East, the Prophet Muhammed said “In the black seed is healing for every disease except death.”

Despite all the historical lore of black cumin, it didn’t become a focus of modern research until the late 1970’s. Since that time, universities around the world have conducted over 800 studies that help verify the healing properties of Black cumin.

Black cumin grows in the form of an annual flowering plant. The fruit is a large and inflated capsule containing many seeds. The seeds themselves contain protein, important fatty acids, essential oils, fiber, moisture, ash, protein, carbs, and thymoquinone.

Renowned scientist and researcher Dr. Christina Cook has stated, “Black cumin has numerous, research-backed, prevention, wellness, and health benefits as it pertains to supporting the healthy cells of the body getting rid of bad cells in the body.  As it continues to get attention in the areas of wellness, it is also increasingly getting recognition in the areas of treatments of diseases, including, but not limited to, the areas where there are issues like diabetes and cancer.”

Black cumin has a wealth of both omega 3 and omega 6 essential fatty acids, which we know are packed with nutrients.  But most of the therapeutic properties of this plant are due to the presence of thymoquinone, or TQ, which is a major, active chemical component of the oil.

Black cumin is used to treat a wide variety of diseases, including bronchitis, asthma, diarrhea, rheumatism and skin disorders. It is also used to aid digestion, as a liver tonic, an appetite stimulant, to fight parasitic infections, to increase milk production in nursing mothers and to support the immune system.

But the list for what black cumin can aid in doesn’t stop there. It has shown antibacterial, antifungal, antioxidant and anti-inflammatory properties. More and more, it is being used to help fight cancer, diabetes, heart problems and testicular issues.

For centuries black cumin seed oil has been used to treat the skin. It helps increase hair growth, minimize dark spots and discoloration, and has a firming and strengthening effect on skin. Taken internally, black cumin oil can help a wide range of skin, hair and nail issues without causing any irritation that may possibly result from topical use.  More contemporary studies have shown it to be beneficial to people who suffer from skin disorders like eczema and psoriasis. According to a recent study, it can help to both sooth inflammation and improve the rate at which skin heals.

Across all populations and age groups worldwide, obesity is becoming one of the most common health concerns. Weight gain can significantly increase coronary heart disease, Type 2 diabetes, stroke, metabolic syndrome and cancers.

The Journal of Diabetes and Metabolic Disorders published a journal in 2013 that found that black cumin seed oil could be effective in helping to tackle the obesity epidemic.  Another study suggested that black cumin can help significantly decrease body weight, body fat and weight and hip circumference.

For centuries, black cumin has been used traditionally to improve fertility. A placebo-controlled clinical trial was conducted in 2014 with men who had abnormal sperm. Black cumin seed oil was found to improve sperm movement, increase sperm count and improve semen volume.

Many studies, both past and present, have shown that black cumin seed oil helps to alleviate asthma, allergies, and other respiratory issues. In a study tested on human subjects, extracts of black cumin showed a potent effect on asthmatic airways.  It has also been shown to improve coughing, wheezing and lung function in some people with asthma.

Black Cumin Seed Oil may help reduce the size of cancerous tumors, including those associated with breast cancer. Thymoquinone, an important component of black cumin, has been shown to help destroy leukemia cells. Other studies have shown this same effect in brain tumor cells, cervical and pancreatic cancer, and oral cancer cells. It is also sometimes recommended as a natural protection against cell damage from conventional radiation treatment.

Some studies have shown that black cumin helps to promote healthy cholesterol levels in the body, and one study shows that it may help to normalize blood pressure. It has also been associated with lowering an elevated heart rate. The thymoquinone in black cumin may benefit endothelial dysfunction, which plays a role in many cardiovascular disorders.

In general, the thymoquinone in black cumin has a protective effect on the heart.

Early research studies show that black cumin powder can help to improve blood sugar levels in people suffering from diabetes. An additional benefit of black cumin is that it may also help improve cholesterol levels of diabetes patients as well. Most patients needed 2 grams of black cumin a day to see positive benefits.

Black cumin contains antioxidants, B-vitamins and other beneficial acids.  These substances help it balance the immune system.  In terms of autoimmune disorders, it has been found to be superior to almost every other natural remedy that is currently available. One study on rats found that black cumin helped to increase the immunity system’s response rate.

The oil of black cumin has been shown to have anti-inflammatory effects on diseases ranging from colitis, peritonitis, and oedema to arthritis. Both a French and Iranian study showed how black cumin’s thymoquinone strongly inhibits fMLF-induced neutrophil functions and exhibits anti-inflammatory properties in vivo.

Black cumin also help to aid in digestion. They may decrease gas, bloating and stomach pain. Even intestinal parasites have been successfully fought off using black cumin seed oil. One study sited thymoquinone as the component that provides all these gastroprotective properties.

The powerful ingredient thymoquinone has shown to help wage war on harmful microbes in the body. It can help fight off bacteria, viruses and fungus. In one study, MRSA was completely wiped out by black cumin oil.

Many studies have shown how black cumin can help to stave off candida and fungal infections. Internally, in the digestive system, and externally, on the skin, black cumin can prevent the growth and spread of fungus and candida.

Black cumin is likely safe for most people. If it’s used as an oil or powder, it’s considered possibly safe for short-term use.

When taken by mouth, black cumin can cause an upset stomach or constipation. When used topically, it can possibly irritate the skin.

Black cumin seems to be safe in food amounts during pregnancy, but you should avoid taking larger medicinal amounts. The oil is possibly safe for children if taken in recommended amounts in the short-term.

Black cumin can help to lower blood sugar level in some people. Monitor yourself carefully if you have diabetes.

It may also slow blood clotting, so you should consider avoiding black cumin if you have a bleeding disorder. It’s recommended to stop taking black cumin at least two weeks before a scheduled surgery.

Black Cumin can react with several different types of herbs and supplements. Consult your doctor before taking black cumin while also taking the following :

Black Cumin can have a moderate interaction with the following drugs. Consult your doctor if you are currently taking:

No official black cumin and black cumin seed oil dosage has been established for treating all conditions. It’s best to follow recommended doses on the label, which are typically between 1 and 3 teaspoons daily. However, if you are trying it for the first time, it is suggested to start with 1/2 teaspoon per day and work your way up. Consult your physician for best results.

1 gram of black cumin powder twice daily for up to 12 months.

Dosage, Interactions and Side Effects