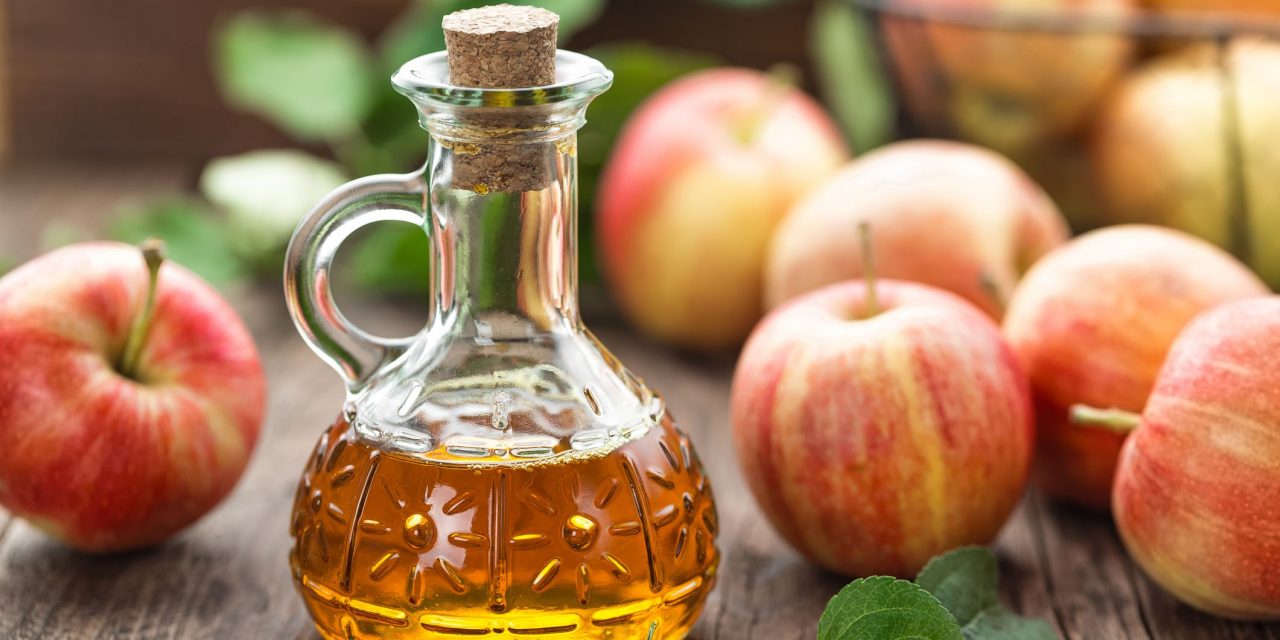 Apple cider vinegar is most often used as a cooking ingredient, but it also has many other  household, beauty, and cooking uses. The uses of this vinegar include preserving food, cleaning,  washing hair, and improving skin. Apple cider vinegar can help diabetics control their blood  sugar levels. Also helpful for diabetics, it aids in weight loss. Apple cider vinegar can help lower  the risk of cancer because of its cancer cell killing abilities. Because of its anti-bacterial  properties, it can be used as a deodorizer, a natural all-purpose cleaner, to soothe sore throats, a  mouth wash, to clean tooth brushes, a dish detergent, to wash fruits and vegetables, to clean  dentures, and teeth whitening. For the purpose of beauty, skin, and hygiene health, it can be used  as a facial toner, to treat acne, as a dandruff treatment, in the bath, a hair rinse, to get rid of warts,  and a natural deodorant. For food, apple cider vinegar is used a food preservative, a salad  vinaigrette, to better boil eggs, as marinade, as a sauce, in a soup, in cakes and candies, and hot  drinks. Other things apple cider vinegar is used for: to trap fruit flies, a weed killer, and to get rid of fleas.

Bioactive ingredients that are food based, like vinegar, have been suggested to be a  possible solution to reduce the global epidemic of obesity. Using fermented foods, such as  vinegar, is known to be a healthy and beneficial way to provide nutritional value and other health  benefits to humans. Vinegar has shown many bio-activities for combating: too much cholesterol  in the blood, too much glucose in bloodstream, abnormally high blood pressure, bacteria causing disease, blood clots, and cancer. It was identified that the main component in vinegar, acetic acid,  helps fight obesity; however, tests have demonstrated that there are different degrees of  bioactivity produced from different starting materials. The objective of the tests performed were  to compare the anti-inflammatory and anti-obesity effects of Nipa vinegar and synthetic acetic  acid vinegar in mice fed a high-fat diet. The method was to give the mice a high-fat diet for 33  weeks. Both the Nipa vinegar and the acetic acid vinegar lowered body weight and food intake,  but a higher dose of Nipa vinegar can help combat obesity by changing the lipid metabolism, gut  bacteria composition, and inflammation in high-fat-diet-induced obese mice.

Vinegar can be made from many fermented carbohydrates, including apples, pears,  grapes, wine, dates, berries, melons, potatoes, grains, maple syrup, beer, and many more. Vinegar  that is commercialized is either produced buy fast or sloe fermentation processes. For the fast  method, because of agitation, the liquid is oxygenated, and the bacteria culture is engulfed. For  slower methods, they are usually used for producing wine vinegars, and the acetic acid culture  bacteria spreads on the surface of the liquid; and for week and months, the fermentation process  grows. Acetic acid, the acid that makes vinegar identify as vinegar, is the reason the pungent  odor and flavor of vinegar exists. The origin of vinegar flighting off infections and other  condition dates back to the Hippocrates around 420 BBC when they used it to promote wound  healing. Scientific discoveries proved that vinegar has antimicrobial properties. Researchers  reported the medicinal uses of vinegar as having anti-infective properties, heart protection  effects, anti-tumor activity, and, blood glucose control.

ACV, each bacteria and fungal was cultured with different concentrations of apple cider vinegar.  For the results: E. coli growth was restricted to a lower dilution of 1/50 or 0.1% acidity; C.  albicans growth limitation was at dilution of 5% acidity; and for S. aureus, growth was restricted  to a 1/2 dilution or 2.5% acidity. Apple cider vinegar has many antimicrobial properties located  on different microbial species, which affects disease causing bacteria growth. After the ACV  treatment, there was notable impairment on the microbes that damaged cell integrity, nuclear  material, and metabolic and structural proteins. It is considered a string possibility that apple  cider vinegar acts like an anti-pathogen.

Diets supplemented with natural antioxidants have beneficial effects on blood pressure,  oxidative stress, serum lipid composition, and oxidative stress; however, diets enriched with  synthetic antioxidants demonstrated contradictive results. A daily dosage of apple cider vinegar  was tested to determine how it would affect heart and blood vessels risk factor associated with  obesity in high-fat diet-induced high cholesterol Wistar rats. After 6 to 9 weeks of being fed a  high-fat diet, apple cider vinegar significantly increased serum total cholesterol, lipids found in  the blood, low-density fat-transporting protein-cholesterol (LDL-C), very low density fat transporting proteins, and the index of fatty plaque formations in the blood. Oxidative stress was  developed, but was reduced significantly due to daily does of apple cider vinegar. The results  concluded that ACV can be beneficial for reducing oxidative stress in high-fat diet Wistar rats.

An experiment was conducted to determine the effects of apple cider vinegar (ACV) and  propionic acid (PA) on biochemical parameters of fluid found in invertebrates, intestinal  ecological communities of microorganisms, and the microscopic structure of tissues of the  digestive glands in white shrimp. Diets of five, supplemented with 1.0, 2.0, and 4.0% of apple  cider vinegar, 0.5% propionic acid, and a control diet with no supplements, were evaluated. The  trail showed that shrimp fed with ACV and PA diets had notably higher total protein level versus  the strip fed the control diet. The results concluded that apple cider vinegar and propionic acid  had antimicrobial activity and proved to be beneficial on health.

The results of research can prove, without a doubt, the antimicrobial activity of ACV to  be true at full strength concentrations. Although strong antibacterial was observed, the activity  cannot be generalized because in the terms of yeasts, anti fungal activity, and candida, they were  proven to be less less susceptible. Confirmed by researchers’ characterization of antioxidant  activity and the bioactive compounds, the antimicrobial and antioxidant properties are discovered  to the total synthetic thermosetting resin content of apple cider vinegar. Also, ACV showed  toxicity at low concentrations when checking for its cytotoxicity. The results demonstrate that  more in vitro and in vivo authentications are of importance to better weigh the pros and cons of  apple cider vinegar.

Improvement of non-specific immunity, growth, and  activity of digestive enzymes in Carassius auratus as a  result of apple cider vinegar administration to diet

A study was conducted to determine the effects of apple cider vinegar on non-specific  immunity of skin and serum mucus, growth indices, and activity of digestive enzymes in  Carassius auratus or goldfish. In the study, 180 fish were assigned to four treatment groups with  three duplications in a completely randomized design. Using a basal diet, the fish were fed for  105 days supplemented with zero, one, two, three, and four percent of ACV. Results showed an  increase in lysozyme or catalyzing enzyme activity, air changes per hour at 50 pascals (ACH50),  and total proteins in the serum and cells of the immune system or immunoglobulin of skin mucus  in fish fed with two percent ACV diet. It was found that the total lysozyme activity and  immunoglobulin were notably lower in the serum of fish fed with a controlled diet than the fish  fed with the two percent ACV diet. The results of the study showed that the addition of a limited  quantity of apple cider vinegar into the diet can improve immunity and growth restrictions in  goldfish or C. auratus.

A recent investigation examined the streptozotocin-induced cellular toxicity in mouse  neuroblastoma (cancer) cells, and zinc with the high-fat diet-induced neurotoxicity in mouse  brain. Theses animals and cells were pretreated with ACV, Rivastigmine, and Chrysin to examine  their protection against neurotoxicity and cell toxicity. Compared with Chrysin and  Rivastigmine, apple cider vinegar demonstrated better neuroprotection and antioxidant potential.  Because of the high antioxidant activity, ACV, included in a regular diet, could have encouraging  and effective potential against neurological complications. All cellular, biochemical, behavioral,  and histopathological data showed that ACV had very high antioxidant potential. This study  could help launch a new pharmacological therapeutic approach through apple cider vinegar  directed towards cognitive impairments linked with Alzheimer’s disease. Therefore, including  ACV in the daily diet may help reduce the threat of neurodegenerative diseases.

Apple cider vinegar, the well-known home remedy, had a variety of health benefits  including antioxidant and antimicrobial effects. Researchers suggests that the acetic acid found in  ACV is the reason for its healthy benefits. It can help kill harmful pathogens, and previous  studies have showed that it stops bacteria likeE- color from growing in food. Previous studies  have demonstrated that apple cider vinegar may lower insulin response and may help lower  blood sugar levels to manage diabetes. ACV may aid in weight loss by promoting satiety; and  not to mention, is only three calories per tablespoon. In addition, it can improve heart health in  animals by lowering cholesterol and triglyceride levels, as well as many other heart disease  factors. Lastly, given ACV’s antibacterial properties, it may boost skin heathen help treat acne  and prevent skin infections linked to eczema and other skin conditions.

The aim of this research was to look into the immunomodulatory and health-promoting  effects of combining apple cider vinegar (ACV) and Lactobacillus casei in the diet of common  carp (Cyprinus carpio). In comparison to the other classes, the Pro + LACV and Pro + HACV  treatments showed a significant improvement in overall Ig level and lysozyme activity in skin  mucus (P 0.05). These findings showed that co-administration of ACV increased the  immunomodulatory and health-promoting effects of L. casei, and that it could be used as a  potential immunostimulant in popular carp culture at an early stage.